Factory Workers Slam Adidas for Violations of Freedom of Association, Health and Safety

Workers at Adidas contract factories in opposite corners of the globe began a series of protests urging the German sportswear giant to rein in labor rights violations in its 1,200-factory global production network that employs roughly 1.2 million workers in 62 countries.

On October 7, workers at a Adidas soccer cleat producer PT Panarub Dwikarya gathered at Adidas’ Jakarta, Indonesia office to protest the firing of 1,300 union members who went on strike when the company refused to pay the legal minimum wage. Later that day labor unions in Buenos Aires focused on dangerous conditions for leatherworkers in Adidas’ supplier in Argentina, especially the Sadesa tannery in Esperanza, as part of a celebration of World Day for Better Work. A day later, university students at Cornell University in the US kicked off a series of campus protests over illegal firings of workers who organized unions at factories making Adidas college-logo apparel at two plants in Nicaragua – Centro Textil and Handsome Nica – workers who will themselves protest at their factories this week. Over the weekend on October 19 workers at Adidas contract factories in El Salvador staged a protest at that country’s only authorized Adidas distributor to pressure the brand over labor violations worldwide.

Workers and activists in India, Nicaragua, Hong Kong and the United Kingdom are among those joining in with their own protest activities this week.

The protests follow workers’ letter to Adidas that urged action on six contract factories throughout the world. Workers’ newly formed union coalition, the International Union League for Brand Responsibility, asserted that these cases demonstrate a general failure by Adidas to ensure workplace safety and union freedoms in the multinational’s outsourced production network. In their letter, the activists invited Adidas to meet and discuss a global agreement to “change the incentive structure for subcontracted factories” where their unions represent the workforce, reversing a system “that currently rewards cutting corners on worker safety and conditions.” Though Adidas is in dialogue with the activists over the individual cases, the brand has not responded regarding the proposal to discuss a global solution.

Estela Ramirez (center in above photo), the League’s Global Chair and former worker at Adidas contractor Hermosa Manufacturing in El Salvador, said: “The only sustainable solution to the systemic labor abuse in Adidas’ production network is to proactively prevent labor violations, not just respond after the fact, case by case.” Ramirez and her coworkers occupied their Adidas contract factory in 2005 after management abandoned the factory and owed workers them $825,000.

This month’s Adidas protests are coordinated by various labor unions belonging to the International Union League for Brand Responsibility as well as supporting organizations such as Washington-based United Students Against Sweatshops. For photos see <http://bit.ly/AdidasFlickr> and for more information see <www.adidasworkers.org> 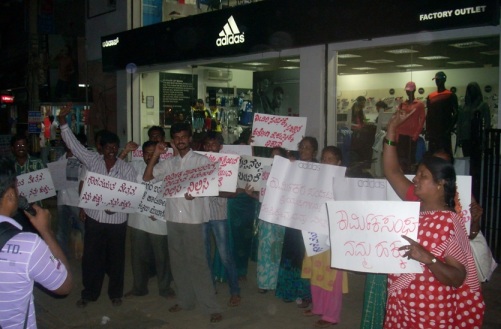