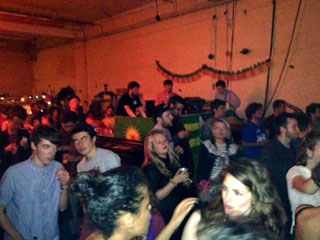 The leadership of the International Union League for Brand Responsibility extends our great appreciation to the 400 activists, DJs, dancers and other friends in London who raised £2,000 (a little over €2,000, nearly $3,000). We just received this donation, following their June 28 "All Out" fundraiser party at the New Empowering Church of London.

To our friends in London in the United Kingdom who support the International Union League, I want to thank you for your interest in defending workers' rights. I believe your solidarity is very important, because the best thing we can all do is to support the international union movement, which is the only way to truly defend ourselves as workers. To be a unionist is to be part of a movement to alert the people to violations of our rights, here in Nicaragua and in all other countries. This is worldwide. The violation of our rights is worldwide. Although they threaten us, let us continue forward and all work hand in hand.

Although unions affiliated with the League recently voted to begin paying voluntary dues, the poverty wages we are paid cannot sustain this global campaign. We rely on the economic solidarity of workers, students and activists from all around the world to strengthen our organization. Donations help us pay for bus fare and cell phones to organize our fellow workers, and to maintain communication and coordination across the many countries where we organize.

Please consider starting a regular monthly donation or a one-time donation to the League, and ask your friends and family to do the same!