Latin America: Adidas workers and union leaders from across region join for conference

(To win social justice, everyone struggle together with the Union League!) 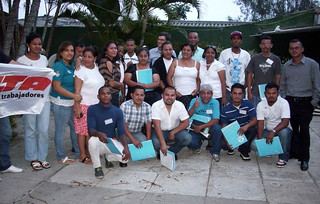 That was the chant last weekend in San Salvador, where workers from Adidas contractors across Latin America convened with other union leaders from around the region for the Americas Regional Conference of the International Union League for Brand Responsibility.

During the conference, the League voted on new members. The Industrial Workers' Federation of Argentina (FeTIA-CTA) reports on its blog:

FeTIA was admitted after being submitted to a vote by the union organizations from Honduras, El Salvador, Nicaragua, Dominican Republic, as well as countries in Asia including Bangladesh, Indonesia and Cambodia, and the vote was unanimous. In the same conference, there was a positive vote to admit the union TEKSiF from Turkey.

Currently, union organizations in 10 countries make up the League.

The Adidas workers exchanged stories of poverty wages, unsafe working conditions and union-busting. But they didn't only talk about problems, they talked about solutions. FeTIA's report continues:

At the conference, we established a work plan to unite forces and negotiate agreements with Adidas to benefit workers that make their products. What do Adidas workers want? Living wages, job security, and fair prices from the brands. We want Adidas to keep its orders in unionized factories, since now Adidas cuts their orders to union factories as retaliation against workers who organize.

We established strategies and battle plans to demand the rehiring of workers fired for organizing at Adidas supplier factories in the Dominican Republic and Nicaragua.

We also held a moment of silence from the hundreds of sewing workers killed in the collapse of a 5-story factory in Bangladesh.