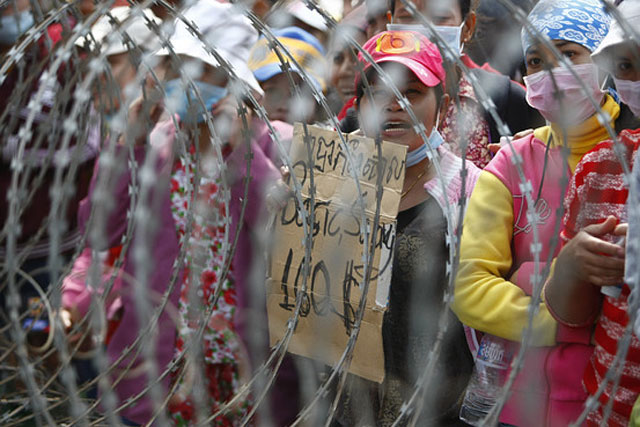 Call to Action on $177 Campaign

After the violent crackdown on workers in which 5 workers were killed, 40 workers were seriously injured and 25 workers were arrested during the campaign to increase the minimum wage, workers and their unions have strongly advocated by cooperating with relevant stakeholders around the world in order to push the Government and buyers to give the proper minimum wage increase and the freedoms and compensation to workers. The campaign has been ongoing since early January but has not yet achieved the proper resolution. On 30th May, 2014, the arrested were released but the court didn’t drop the charges against them (convicted with suspended sentences) and many other problems have not yet been addressed.

Meanwhile, the minimum wage issue is still the main topic of demonstrations. We work hard every day to create huge profits for our employers and yet still do not have enough to feed our families and meet our basic needs. The government and employers said that in October they will officially announce the amount of the minimum wage increase to be implemented in January 2015. We have been waiting a long time for a minimum wage increase and justice for our colleagues who lost their lives.

We therefore call for solidarity from workers, unionists, concerned citizens, and civil organizations around the world to join us in an escalated national and international campaign to push the buyers to do a real intervention to end worker exploitation during the negotiation period from now until October, 2014 and in the future. The buyers must:

Please join us for a national and international day of action on 17th Sept, 2014 to demand justice from some of the influential buyers and suppliers in Cambodia, especially: H&M, Gap, Adidas, Inditex, Levis, C&A, WalMart and Puma. We need $177!

The League is planning solidarity protests around the world. Want to get involved? Visit the demonstration planning hub set up by our supporters, or contact [email protected]