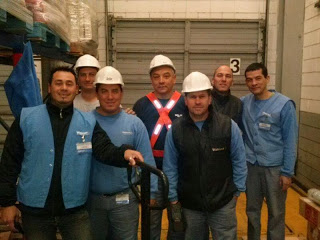 On January 15 in the Province of Santa Fe, Walmart Argentina prevented more than 300 workers from taking part in union elections for leadership of the Centro Unión Empleados de Comercio de Santa Fe (CUEC). This election was controversial because the current President and leadership of CUEC, which has repeatedly sided with Walmart management against its own members, was challenged by an opposition slate, Lista Celeste y Blanca, many of whom are members of League affiliate Federación de Trabajadores de la Industria y Afines (FeTIA–CTA).

The current leadership of the CUEC has refused to act on many cases of abuse, including discrimination based on physical appearance and sexual orientation, the erosion of job security, and the dismissal without cause of over 40 workers, all in the last year.

Walmart’s denial of workers’ right to participate in their union election was amplified by open intimidation and physical threats. Opposition leaders received threatening messages, including a bloody knife sent by mail with a note reading “this is what will happen to you”. The opposition has accused the current CUEC leadership of ballot fraud and denounced the election as a sham designed to keep Walmart’s sweetheart union leaders in their positions.

The death threats are even more alarming given recent events. Earlier this month, the union activist Juan Carlos Sánchez Luna of the LD factory -- a Walmart contractor in El Salvador -- was murdered after a series of threats of violence against his union, Sindicato de la Industria Textil Salvadoreña (SITS–FESS), since 2007, as has been denounced by UNI Global Union and FESS.

The League strongly denounces Walmart’s blatant infringement on the basic right of workers to participate in the democratic election of their union leaders, as part of a generalized pattern of labor rights in abuse in Walmart’s entire supply chain. We call upon Walmart to take full responsibility and bring justice to the workers and their families. The open use of violence or threats of violence are not acceptable in any context and Walmart must be held accountable for the deplorable conditions it foments globally.

The League will continue to campaign and work with the unions of Argentina and countries around the world to seek justice from Walmart and to ensure that the corporation is held responsible for its violations of workers’ rights. We call upon the international community to do the same.