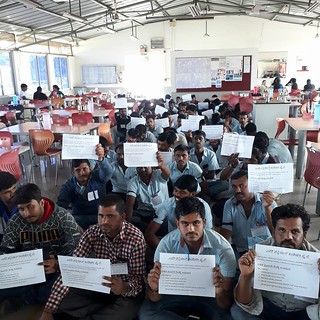 Workers at Avery Dennison Pvt. Ltd. in Bangalore, India have now been on a hunger strike for 3 days to protest the inhumane working conditions in their factory. Workers at the factory have been paid below minimum wage illegally for years and were forced to work on short-term contracts, despite working consistently for years, working alongside permanent workers but not allowed the same benefits for the same work.

Given the unacceptable conditions, workers began organizing with League member Garment and Textile Workers' Union (GATWU) to stand up for their rights and demand fair working conditions. They called for Avery Dennison to provide equal pay for equal work and to ensure workers, some of whom have worked with the company consistently for 10 years, be considered legal, permanent employees instead of the company illegally forcing them to work 6-month short-term contracts back to back. The company, instead of listening to the valid concerns of the workers and respecting their right to freedom of association, decided to illegally dismiss 41 workers for standing up for their rights and choosing to organize a union! This is a CLEAR violation of the workers' rights and should not be tolerated! 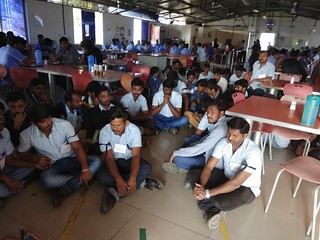 Avery Dennison workers make hangtags and labels for an array of multinational brands such as H&M, Adidas, Levi's, Gap, Timberland, Zara, Hanesbrands, and others. These brands have a responsibility to ensure that their supplier is respecting its workers' rights to freedom of association and equal pay for equal work! Instead they are shamefully allowing workers to starve!

Solidarity with Avery Dennison workers standing up for their basic rights!