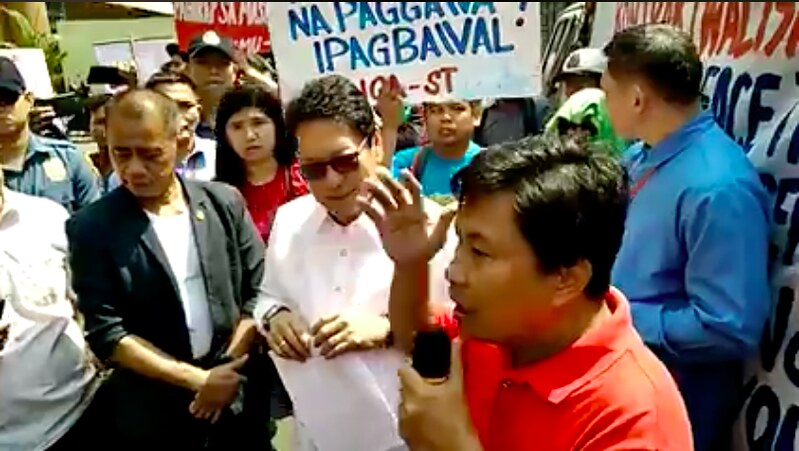 Today marks President Duterte’s date for reviewing the Executive Order prohibiting contractualization proposed by KMU and other labor centers. The midweek of March also marks one year of D.O. 174, a department order which the Duterte government issued, through the Department of Labor. A year ago, workers called D.O. 174 a continued license for big companies to conduct widespread contractualization.

“In front of us, you pretend, you want to fool us that you are trying to resolve our problems. It has been two years, let us not fool each other. What we want is for you to call for hearing, for you to execute the decisions on the cases filed by the workers,” Adonis told Secretary Bello.

“This has been long-time issue, releasing a department order that will junk contractualization. Those (factory) that you said you inspected. Those (cases) which workers received a favorable decision on, many of those decisions, you are now reversing,” he added.

“So fellow workers, we will continue. We will expose to workers and people, how rotten, how inutile this Department of Labor is. They cannot fool us. They should stop pretending that they are for the workers. They already exposed themselves,” he told workers.

“If Secretary Bello is accountable for the continued use of contractualization, so is (President) Duterte. They are both accountable. They are both anti-worker. So from this day forward, we will continue our mass mobilizations. There is no other effective power that will pressure them to make favorable decisions for the workers, but the power of workers,” he said.