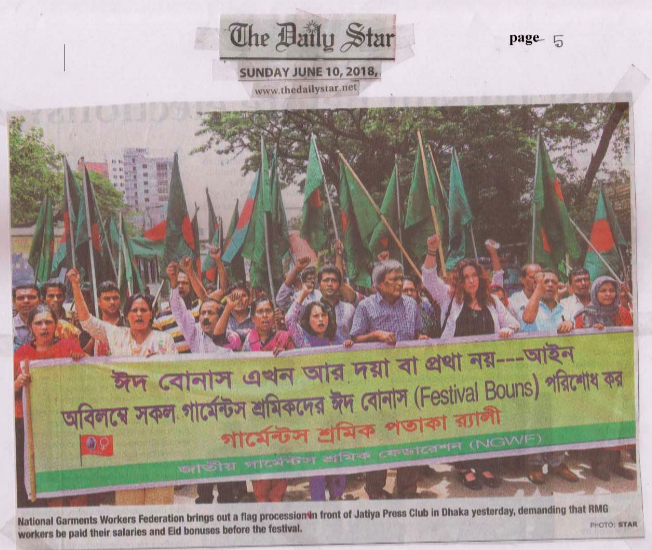 Today on 9 June prior to the flag rally, this demand was raised at the gathering in front of National Press club at 11 am with initiative of National Garment Workers Federation (NGWF). Following the gathering, a rally paraded through central streets and ended up in front of the headquarters of the Federation. Several hundred workers participated in the rally and gathering with National Flag of Bangladesh.

The Speakers Said, Eid Bonus is no longer a kindness or custom, but the law. However, many garment owners do not pay Eid bonuses to the workers, or sometimes if they pay it is also according to their will and a lump sum. Various organizations demanded assurance of the payment of Eid Bonuses and salary allowance by 20th Ramadan (6th June). The Labor Minister fixed the last day for paying Festival bonuses and salary allowance by 25th Ramadan. At the time of this writing, it is 23rd Ramadan (9th June), but the workers' Eid bonuses from most factories have not been paid. We are worried about it. We demand the Eid bonus and salary allowance owed to garment workers immediately.

Speakers also said, “Every year, prior to Eid, some factory owners took shelter of procrastination and excuse regarding Eid (Festival) bonus and salary allowance and garment factory workers are deprived from Eid Bonus. As a result, many workers face inhuman condition. They can’t enjoy the festival with family members. Request and urge to everyone for being vigilant including the Bangladeshi government, BGMEA, and all law enforcement agencies. If any owner takes refuge in such cheating, he should be arrested with exemplary punishment!”