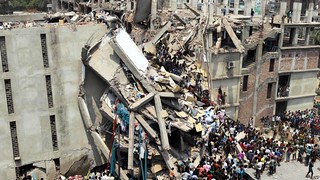 » Update: The death toll at Rana Plaza exceeds 1,100. Many European retailers have joined the Bangladesh Fire and Building Safety Agreement, while US retailers like Gap and Walmart continue to refuse. See news at NY Times and LA Times, and take action here.  (May 17)

Kalpona is the Executive Director of the Bangladesh Center for Worker Solidarity. She is a former garment worker and is currently in the United States calling on retailers like Walmart, the Gap and Disney to lead on improving working conditions and adopting fires safety standards in Bangladesh.

Today, international worker rights groups are calling for immediate action from international corporations and brands following the horrific news of a deadly collapse of the Rana Plaza building in Savar, in Dhaka Bangladesh. The collapse of the eight story building that housed five factories and a mall, has reportedly killed at least 80 people and injured over 800. For the last month Kalpona has been touring the United States with Sumi Abedin, a young garment worker who jumped out of a third story window to save her life as the Tazreen factory burned killing on 112.

“Our deepest sympathies go out to the families of workers lost in this tragic event.

“It must be said, these tragedies can be prevented by multinational corporations like Walmart and the Gap that operate in Bangladesh. Because of these companies’ negligence and willful ignorance, garment workers are in danger every day because of the unsafe working conditions.

“As we learn more details, we will better understand the brands that were manufactured in these factories, but we already know that the largest retailers in the world hold tremendous power to transform conditions for garment workers – mostly young women – in Bangladesh.

“Today’s news is yet another reminder that Walmart and the Gap must immediately adopt the Bangladesh Fire and Building Safety Agreement, a transparent and legally binding agreement that includes worker representation, independent building inspections, worker rights training, public disclosure and a long-overdue review of safety standards. The safety agreement is the first step toward ensuring no more lives are lost.”

More on their tour is available here: bit.ly/EndDeathtraps