We are Indonesian Adidas workers: We support the struggle of Adidas workers in China, Taiwan, South America and in every country to fight against: Union busting, bad working conditions, unilateral layoffs, and violations of workers' rights at suppliers and subcontractors of Adidas.

That was the message blazoned across two blazoned on two banners outside Adidas' office in Jakarta today, one in English, the other in Indonesian Bahasa.

The factory responded by firing all of the workers who participated in the strike. GSBI and various labor advocates sent urgent appeals for action to Adidas, as a significant amount of their orders to PT Panarub Industry overflow into Pdb, as well as the Japanese sportswear brand Mizuno, which also sources from PDB. Although Adidas has acknowledged that PDB violated the brand's own policies, to date it has not compelled its supplier to rehire these workers.

Not only have the PDB workers refused to back down, but they have joined forces with workers and labor advocates targeting Adidas in Taiwan, Hong Kong, mainland China and beyond. 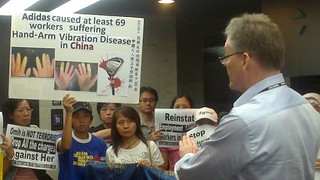 The PDB workers highlighted two other cases besides their own. Dynamic Casting in Guangzhou, China, produces golf clubs for Adidas' TaylorMade brand. Due to unsafe working conditions, including illegally fast machine speeds, a total of 110 workers contracted serious occupational diseases including pneumoconiosis (a lung disease often associated with miners), deafness, benzene poisoning, and Hand/Arm Vibration Syndrome (HAVS) -- an advanced form of Raynaud's syndrome that can cause permanent loss of function in the hands. Some of these workers have told there stories in a video posted on YouTube.

After workers at Dynamic Casting began speaking out and filing claims for compensation, the factory's parent company decided to cut and run. In March of this year, Taiwan-based Dynamic Precision Limited, with Adidas' knowledge, began shutting down the the Guangzhou operation. Management pressured individual workers to quit in exchange for small severance packages, but an organized group of injured workers is demanding a full, fair resolution. Hong Kong-based Globalization Monitor reports that Adidas has increased its orders to Dynamic Precision, despite pleas from labor advocates for Adidas to hold its supplier accountable.

The third case is Stella Footwear in Dongguan, China, also producing footwear for Adidas. This factory, also known as Xingang Shoe Company, employs over 50,000 workers and is owned by Taiwan-based Stella International Holdings Limited. Here multiple workers who have suffered from benzene poisoning are demanding adequate medical attention and compensation. Benzene is found in the glues used in shoe manufacturing. The chemical is a powerful carcinogen linked to leukemia, and can cause death if inhaled in high concentration.

Today's protest by PDB workers and GSBI in Jakarta will be followed by additional actions by the Dynamic Casting workers, Globalization Monitor, Taiwanese labor groups and others in the coming days. We will bring you updates soon. 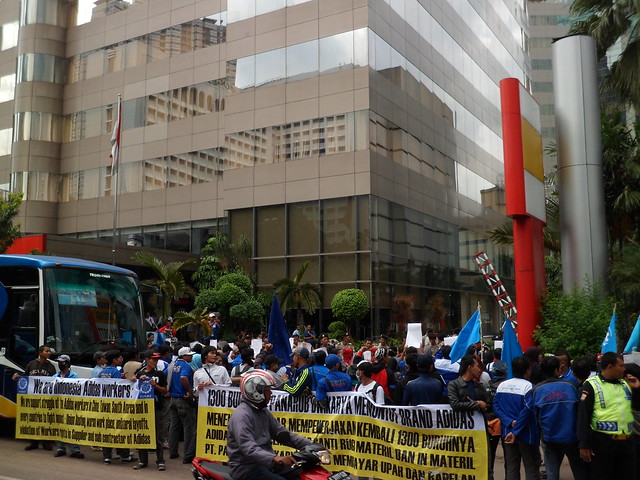