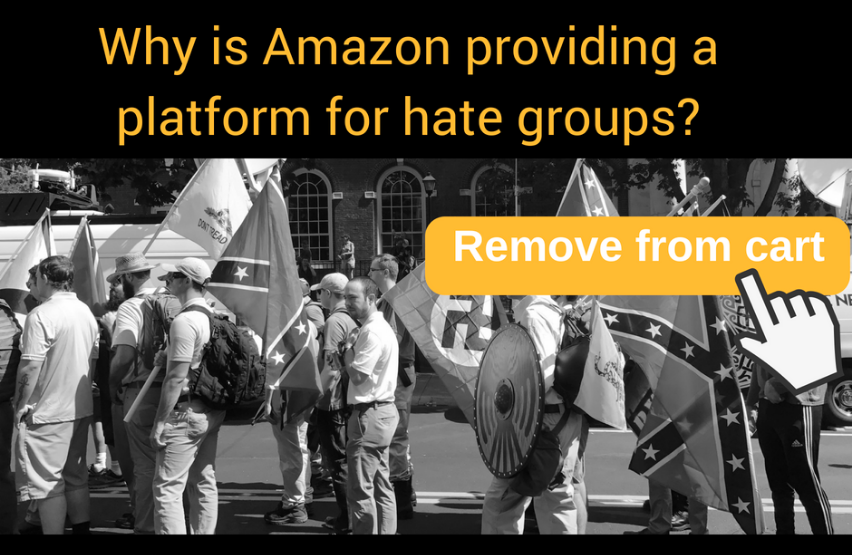 We all know that Amazon makes huge profits by exploiting the labor of its warehouse workers, the factory workers that make its licensed products, and delivery drivers. Turns out, they also profit from racist hate groups who sell their products on the site.

See the message below from our allies in the United States on their important work exposing Amazon’s unscrupulous choice to put profits over basic humanity; sign and share their petition now!

"After white supremacist Dylann Roof murdered nine Black churchgoers in Charleston in 2015, Amazon said it was banning the sale of Confederate flag images from its site. Today, the Action Center on Race and the Economy and the Partnership for Working Families released a report showing that not only are products with Confederate flag and other hate imagery widely available on Amazon.com, but that Amazon allows recognized hate groups to use its various platforms to spread their ideas and generate resources.

The growth of racist hate movements in our country provides a base of support for horrific policies like Trump's Muslim Ban and so-called ‘zero tolerance’ immigration policy. As racist movements have grown, so have incidences of racist violence.

Will you join us in calling on Amazon to take a stand against hate?

Normalizing white supremacist, Islamophobic, and anti-Semitic extremists puts our communities at risk -- and yet the country’s largest online retailer and largest distributor of e-books is providing these groups with a platform to spread their ideas and generate resources to support their operations.

With the public contest for Amazon’s second headquarters (HQ2), many of us are taking a critical look at what kind of neighbor Amazon is, and what values the company promotes. Amazon CEO Jeff Bezos and his board of directors must take a public stand against hate and violence, and stop enabling others to profit from hate."