The Union League stands in solidarity with member Kilusang Mayo Uno in the Philippines standing up to US-backed Duterte's increasingly fascist actions! From KMU: 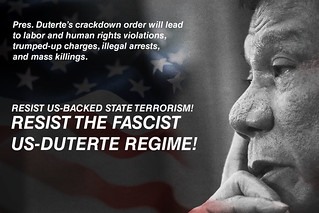 Duterte is terrorizing the people with his crackdown against legal organizations criticizing his tyrannical rule, failed promises and implementation of anti-people policies. This is Duterte’s desperate attempt to quell the Filipino people’s growing dissent and outrage over his mass murdering war on drugs, his promotion of cheap and contractual labor, rejection of free land distribution to farmers, imposition of higher taxes and failure to deliver basic social services like mass housing and mass transport.

Instead of heeding the people’s just and legitimate demands, Duterte has tagged their clamor for genuine change as acts of terrorism and responded with a crackdown order that would only pave way to gross human rights violations, trumped-up charges, illegal arrests, abductions and extra-judicial and political killings.

As far as facts are concerned, it is Duterte who has been committing acts of state terrorism against the people. He murdered over 13,000 poor Filipinos with his war on drugs. He bombed Marawi City to ashes. He has been bombing Lumad schools and communities. He violently broke workers’ strikes. He militarized peasant and indigenous people’s communities resulting in widespread human rights violations and massive displacement and forced evacuations.

With his termination of the peace talks with the NDFP, crackdown against legal organizations, political harassment against Chief Justice Sereno and his constant hype for a “revolutionary government”, Duterte is rapidly establishing his fascist dictatorship. He wants to rid all dissenters and possible opposition so he could implement more anti-worker and anti-people policies dictated by the US.

His recent vulgar display of Marcosian authoritarianism came after the US, through the visit of Donald Trump, gave its blessing and support for his fascist dictatorship. In return, Duterte sold out our country and the people through onerous free trade agreements. These FTAs are behind the railroading of measures to ease constitutional restrictions on foreign ownership, imposition of higher taxes through the tax reform bill, the implementation of a compressed work week, the institutionalization of contractualization through labor contracting agencies, the monopoly control of public transport through the jeepney phaseout program, and other anti-Filipino and pro-foreign big business policies.

No! We will not allow Duterte to impose his US-backed fascist dictatorship upon us. On November 30, thousands of Filipino workers across the country will express their outrage and resistance against the US-Duterte regime’s fascism, state-terrorism and creeping dictatorship. We call on all democracy-loving Filipinos to join us in commemorating the 154th birth anniversary of Andres Bonifacio by continuing his struggle against local tyrants and foreign oppressors.