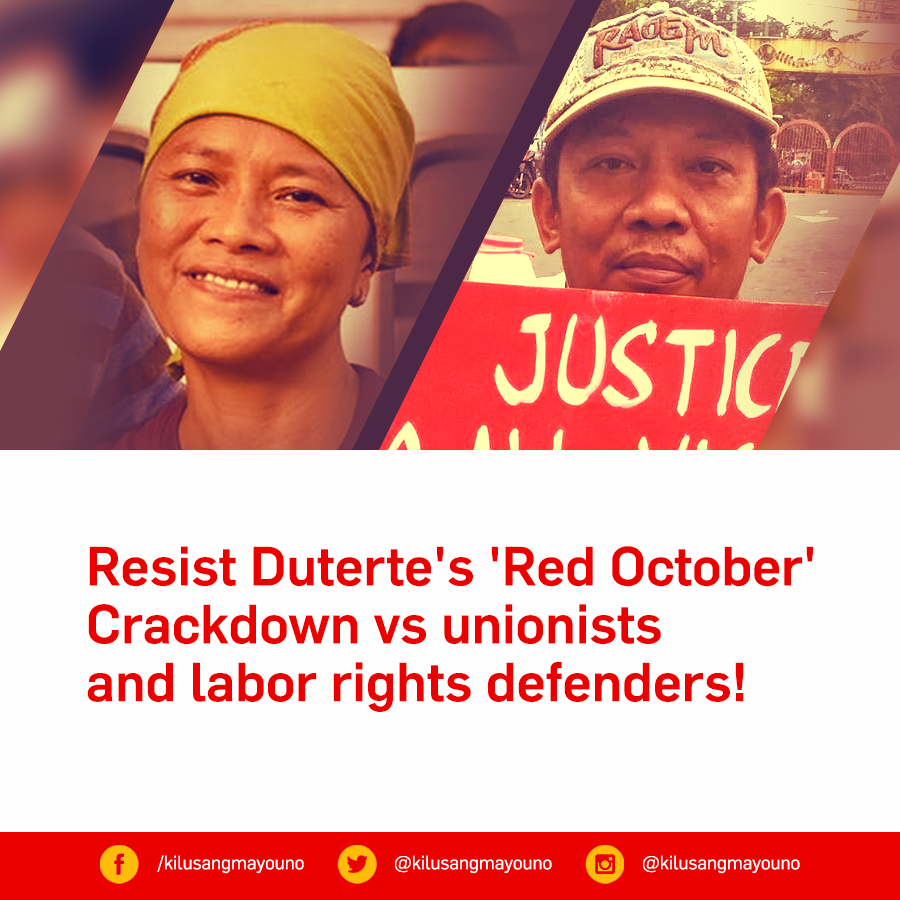 Both Pausal and Jadie have openly led the growing labor protests condemning contractualization and calling for regular jobs and a national minimum wage. They were also active leaders of the labor sector delegation during the recent September 21 rally at Luneta Park.

KMU and KNM launched the “Aklasan para sa regularisasyon at pambansang minimum na sahod” campaign last July, to highlight the growing number of workers’ strikes and protests across the country. This campaign has now been tagged by the AFP as the main component of the ‘Red October’ destabilization plot.

“This deranged crackdown against labor rights defenders is an act of desperation,” said KMU Secretary-General Jerome Adonis. “Duterte is grasping at straws by raising the spectre of a ‘Red October’ destabilization plot, in order to justify his brutal attacks against the legitimate calls of the united labor sector and the growing people’s movement against him.”

State intelligence agents threatened Pausal at his house in Caloocan City this morning. According to Pausal, the agents identified themselves as elements of the Armed Forces of the Philippines (AFP), and warned him against continuing to organize workers. They also asked him to cooperate with their anti-insurgency campaign.

Before that, in early September, the Novaliches Diocesan Workers Center: Kalinga ni San Jose — where workers’ gatherings are regularly conducted — also reported a visit from AFP agents who were looking for Pausal.

Meanwhile, on September 27, Jadie was tailed by AFP agents from her house in Manila to Quezon City, where she was tasked to preside over a KMU campaign meeting.

“Duterte is the one destabilizing the country, with his failed promises and anti-people policies. His insane accusations against KMU, Kadamay, and other people’s organizations are a cover for the deteriorating conditions in the country, thanks to his refusal to end contractualization and the continued depression of wage value though the skyrocketing inflation caused by his TRAIN law,” said Adonis.

“Duterte is dreaming if he thinks that these harassments against our unionists and labor leaders will stop us from advancing our legitimate struggle to uphold and defend workers’ rights against his tyrannical regime,” Adonis said.  “The unrest on the labor front will continue to escalate as Duterte’s attacks on workers’ and human rights intensifies. We will also file appropriate charges against him before the International Labor Organization and other international courts.”

“His fascist attacks only further strengthens the labor sector unity and struggle against his creeping dictatorship,” Adonis added.